Food is something that people are more attracted to. As a result restaurants with different cuisines have emerged. Most of the up market restaurants use cutlery to eat their food. Surprisingly this makes lot of people to back off even if they are invited for a free meal. Some are not used to it and there are some who are not sure whether they are using them the right way. However using cutlery is not a rocket science. Let us share the guide on how to us cutlery professionally so that the next time when you are invited to a meal where you need to use cutlery, you would be able to attend with confidence.

The general cutlery etiquette would be to use the cutlery from outside in. Hence the table will be set the utensils to be used from ‘outside in’. Looking at how the utensils are arranged, we could identify what would be served and in which order. For example if there is a bread plate and a soup soon, you will know that bread and soup will be served or else if you find a pudding fork and spoon in between your dinner fork and knife, then you know there will be pudding afterwards.

Let’s look at how to hold the cutlery. 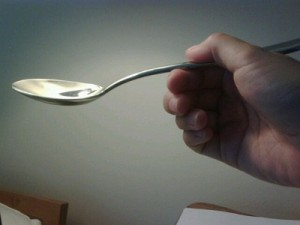 The spoon should be held on the right hand between the thumb and the index finger.
The spoons are generally used to eat rice, pudding or to drink soups. It must be noted that when drinking soup with spoon, you should be sipping the soup from the spoon without putting the whole thing into your mouth in one go.
When drinking soup, ensure you scoop outwards and bring it to your mouth.
Once it is used, keep the end of the spoon’s edge at 6 o’clock position to indicate that you are finished.

Knife
Knives are used to cut meat and other food items that cannot be consumed as it is.
They should be held in right hand in a downward position. It should never be in upward position.
Vital fact to remember is that it is used to cut the food items and not to eat with. Hence never put the knife in to your mouth.

Chopsticks should be held as shown in the pick and when you are about to pick the food from your plate, push your middle finger to separate the chopsticks.
It should be held in the right hand and generally the left hand is used to hold the Chinese soup spoon.

Other things to keep in mind

Should reading this sounds interesting and do you feel it is useful ? Why not get your staff trained in using the cutlery so that they will eat with confidence at the next lunch out or a night out. Contact us on braveenan@ultimmatraining.com